Finally, An Idea For A Legitimate Show On Investing

Every day at my internship, the mounted televisions show a muted CNBC. While the channel sometimes does show decent programming (interviews with industry leaders are about all I’ll watch), a majority of it is just useless noise that investors shouldn’t bother with. The worst part about some of the programming is that people will make emotional-based trades (the worst kind) based off of what some “financial pundit” says on TV. It’s important to remember that the pundit making these recommendation has no idea about your background, education, financial standing, needs, or goals and top of that, they’re right about their picks about as often as you are. Most don’t realize this fact because the financial gurus on TV aren’t actually held accountable for their picks. When was the last time you heard one of them say “Oh, uh…yeah, last month I told you to buy XXX company and now it’s down XX%. I’m sorry about that.”? The answer is “Never.”

One of my favorite blogs to read consistently, A Wealth of Common Sense, recently featured on article on how to create a solid television show about investing. Here are Ben’s thoughts on his idea for a financial TV show that will cater to a long-term investor

– It would only be on once a week.

-Weekly guests would include the different ETF and mutual fund providers along with portfolio managers to explain their strategies and fund options.

-The audience could call/email/tweet their questions on the portfolio management process.

-There would also be a financial advisor segment to discuss how they run their client portfolios and any issues that seem to come up on a regular basis.

-Guests would get at least 15-20 minutes a piece instead of the 5 minute soundbites they get now so they could explain themselves and their positions in detail (other guests would include authors, bloggers, academic researchers and successful individual investors).

-Obviously, you would need many different voices to share their experiences and thoughts since there isn’t a single way of doing things.

-A focal point would be investor behavior and how human nature messes with our decision-making process. There is talk of the ‘dumb money’ from time to time on financial programs these days, but not much coverage gets paid to the long list of cognitive biases that seem to affect every investor, both professional and novice, in different ways.

Ben really hits the nail on the head with this article and it would be delightful to see a show on TV that actually educates its audience on the fundamentals and what’s really important. Now if this was made into a show, I would actually watch intently and encourage others to do the same. However, it’s not likely to ever happen as it wouldn’t feature men screaming at exchanges and other annoying eye-catching “entertainment” that the current programming is so fond of.

According to a study by the Organization for Economic Cooperation and Development, American teens are lagging behind in financial literacy, especially when compared to top countries like China and Belgium. The executive director of the Foundation for Financial Planning, Jim Peniston had a quote that caught my eye:

“I don’t put it on the school system, I put it on our generation. What do kids learn? They learn from what they see at home.”

I agree and disagree with Jim on this quote. I do believe it is important for parents to teach their children the value of money, the importance of saving, and to educate them on the rest of the financial basics. However, I do believe that the lack of financial literacy is a failure of our education system. Financial literacy is one of the most important skills to be taught in schools, from elementary to university, as I wrote about here. I’d go as far as to argue that a student’s level of financial literacy is far more important than their GPA. Those that don’t understand it generally end up taking on more debt, accumulating less wealth, and being poorly prepared for retirement or personal emergencies. While I do believe that this should be taught by parents, I see no excuse as to why it has not been taught in schools. It gives kids a solid foundation for financial well-being and will prove useful throughout their entire lives, unlike, you know, an art class.

Private equity firms are heading into new assets, like troubled US golf courses. The last decade hasn’t been good for most of those in the golf business. The boom in new golfers with the emergence of Tiger Woods as a dominant player in the late 90’s and early 2000’s has faded away. That, paired with tough economic times has led to a decline in new golfers, rounds played, and overall profits of golf courses. Last year, only 14 new courses opened while 157 closed down as owners decided to shut their doors rather than continue to take losses with the extensive operating expenses that are required for basic course upkeep.

It will be interesting to see how these investments pay off. While I’m not sure that golf will ever return to the Tiger-mania days that had new golfers out to the courses in droves, I think it could make a rebound if younger golfers get hooked again. The PGA is rolling out its new “A Quick Nine” initiative to get golfers to play nine holes, versus the typical four hour 18 hole round. Perhaps a shorter time commitment could attract more people that aren’t willing to spend half their day playing golf. Regardless, it will be important for these private equity firms to find a way to create value for a new version of customers if they really want to turn the business around. I believe that this could come from expanding some of the services the golf club offers (spas, workout facilities, pools, etc.) and changing up the membership styles to be more customizable and attractive.

Private equity firms are really starting to piss off investment banking programs with their recruiting tactics. What’s next? Going “full SEC football” and laying dibs on middle school students? Okay, maybe that was a little exaggerated, but the recruiting intensity is ramping up as we see a lot of young talent heading away from Wall Street for Silicon Valley.

Michael Lewis: Not A Fan Of Deeb Salem

I’ve always been a big fan of Michael Lewis’s work from Liar’s Poker to Moneyball (Flash Boys is still on my reading list). The other day he made fun of Deeb Salem, the former Goldman Sachs trader who is disgruntled about not getting the millions that he was “promised”, in a fake letter to his mother and oh was it funny. 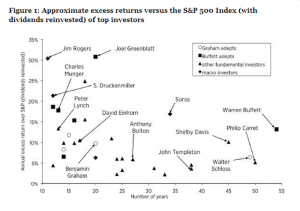 Over the past year, I’ve had exposure to four different ways of learning about the world of finance:

Each way of learning has its own pros and cons, but the various curriculums and methods have brought me a larger knowledge base nonetheless.

I recently read a blog post called “Rethinking The Finance Curriculum” by Tim Johnson and have found it to really hit the nail on the head. At the end of his great post that looks at typical business class requirements and the curriculum of the CFA Program, he comes to an interesting conclusion as to what should actually be emphasized:

In summary, my syllabus structure would be

1. The nature of money (macroeconomics and more)

2. The purpose of finance (history and ethics)

3. The practice of finance (behavioural, risk and asset management

While I do agree with most of his thoughts, here are three items that I think should be added to and/or most emphasized in the typical business curriculum regarding finance:

I’m interested to hear the thoughts of others in the finance community.